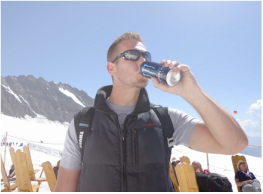 My passion for anything related to audio was sparked at a young age. I started playing drums and percussion at the age of ten, and picked up my first guitar at fifteen. I went on to attain a National Diploma in Percussion from the National School of Arts in 2000 – which began the journey of turning my passion into a career.

In 2001, Australia became my next destination, and I received a formal qualification at the School Of Audio Engineering in Sydney. My dream officially turned into a reality , when I received the opportunity to work as a recording engineer on the world-renowned Sydney All Star Big Band's album, 'Doin' Our Thing’ where I worked under band director Ralph Pyle, and alongside former Air Montserrat Chief Engineer Micheal Paul Stavrou.

Returning to South Africa in 2002, I continued working as freelance recording engineer in Johannesburg. It wasn’t long until I set my eyes on the International market again, and I headed off for the UK midway through the year. Whilst studying full time at the School of Audio Engineering in London, I started working as a recording engineer on a part time basis for Chocolate Records, and completed the Jon Green album ‘Songs in the key of U' – this album went on to get him signed by the Universal Music Publishing Group in the United Kingdom.

After completing my Bachelor of Arts in Recording Arts through SAE London/Middlesex University in mid-2004, it was time to return to South Africa.  Upon my return, an opportunity arose to join the SFX Consulting team; mixing various television and media content for broadcast. Within months I was hooked to everything Post Production and while at SFX Consulting, I had the opportunity to work on various high profile shows such as: Idols, Binnelanders, Star Maker Story, and many more.

In 2006, I was placed at of one of Africa's largest broadcasters, Multichoice Broadcast Services. I was to manage their audio post production facilities under contract with SFX Consulting. Here I headed a team of five audio engineers to ensure quality of work done and the efficiency of the team in a fast-paced, large output facility.

Finally, in 2008, I landed at Aquavision Television Productions. At the time, Aquavision was only one of two Surround Sound facilities in South Africa; delivering award-winning documentaries to a wide array of International broadcasters. The company undertook the production of their first full length feature film in 2009; Tornado and the Kalahari Horse Whisperer. The film went on to be nominated for a SAFTA award for Best Sound Design in 2010.

Award-winning documentaries that I have had the privilege to be part of since 2008 include: Dolphin Army, Bonecrusher Queen, The Last Lioness and Crocodile Ganglands.

Currently, I fulfill the role of Head of Post Production and Dubbing Mixer at Aquavision

Tweets by @MartinF_Mix
Powered by

Create your own unique website with customizable templates.
UA-44760039-1